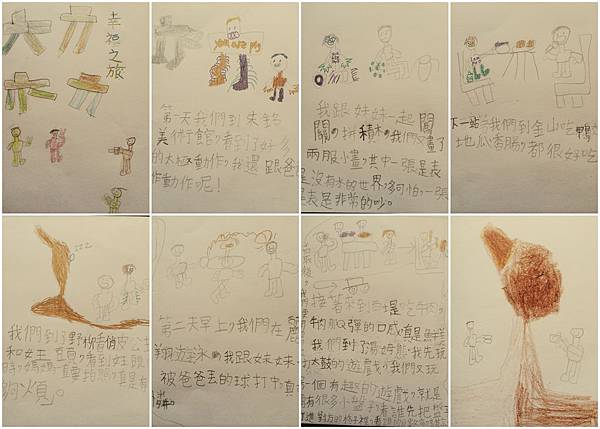 This is the travel book that Eric has finally finished this morning. We went to Jinshan and Yilan at the end of last month. He named his travel book “A Happy Trip”.

It seems Eric named his book just as Peggy did in English, but in Chinese Peggy’s book “快樂旅行” indicates she had a good time; Eric’s book “幸福之旅” reveals he felt he was blessed with happiness. Unlike Peggy, especially when it comes to drawing, Eric seldom uses colors in his work. He prefers to leave his drawings plain, just as he pencils them.

After I persuaded him for a while, feeling a little bit reluctant, he gave his travel book some color. As Eric did so, he meanwhile also added some footnotes on his pictures. Even though those footnotes sounded bad (such as “You are pig”, “You are poo” and “I am poo”), I treated them as his relief from being nagged and bothered on the trip.