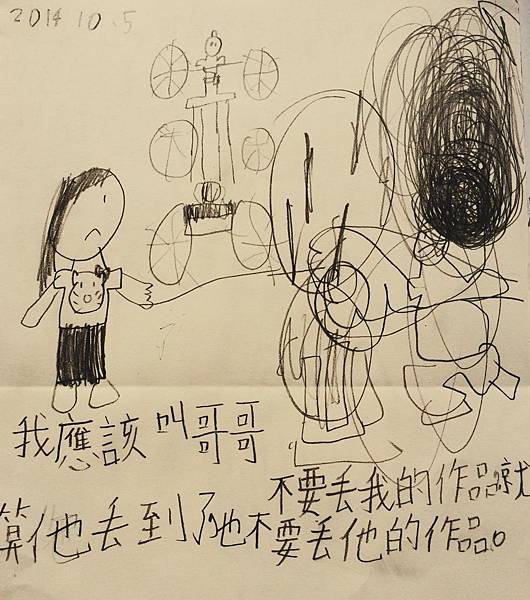 I really enjoy the way Peggy describes her thought in comic. Especially, when she reflected on herself. That always gave me, even the whole family, a burst of laughter.

So, from now on, I would like post her a series of comic works since she (Eric too) was asked to reflect on herself each day before bedtime last month. At first, they were asked to write down their reflections only, but besides handwriting, Peggy who likes to draw just couldn’t help it but come them (her reflections) with her free-will doodling. I hope you enjoy her unique way to interpret the world around her, just as we do.

For foreigners, whoever couldn’t recognize Chinese characters, I would translate what Peggy reflected on in English as much as possible. In this comic, Peggy described she should have asked her brother (Eric) not to target at her piece of work (it is a Rhino Car built with Lego blocks). Even if Eric had targeted at it, she shouldn’t have targeted back (at Eric’s “Rotating Gear” built with Lego blocks) instead.